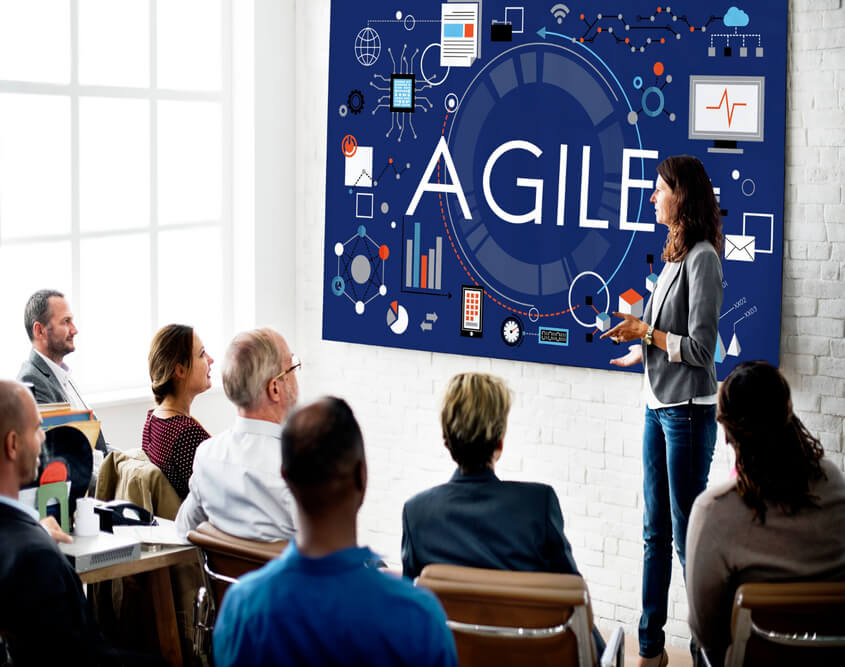 Complex projects involving different teams and departments can be difficult to manage. However, it is essential to get the involved parties on the same page. If an organisation is not able to get everyone to buy into the same workflow, the project will likely fail.

For this reason, various industries have tried different ways to approach the work process. In the past few decades, two of the most popular frameworks have been the waterfall model and the lean-agile approach.

It’s worth noting that both the waterfall and Agile methodologies were originally used in the context of software development, so we’re going to stick to software development examples in our discussion. That being said, both frameworks are still effective for businesses in other industries.

Between the two, the waterfall model is considered the more conventional methodology. It involves a linear progression between developmental phases. These phases might differ from company to company, but the most common arrangement is as follows:

1. Requirements – This is where the team figures out what kind of features a software product requires. All the features will need to be defined before the project progresses.

2. Design – Once the team sets the requirements, they will need to design a product that meets these specifications. They will need to figure out how each component interacts with each other and how the software system works as a whole.

3. Implementation – When the team is done planning the system, they will then develop each feature as a separate unit. Once complete, each unit will be tested individually.

4. Integration and Testing – The units are integrated into a singular system and the entire product is tested one last time before it is released. Any bugs or failures will need to be fixed.

5. Release – End users will be able to use the software for the first time. The development team will also gather user feedback to improve the product.

6. Maintenance – The team will need to release patches throughout the product’s lifespan so that it functions properly even after changes in hardware and/or user behaviour.

Generally speaking, this whole sequence may take multiple years to complete, depending on the complexity of the project. In some cases, the planning stages might even take one or two years to finish.

While thorough planning has its benefits, it can pose significant problems. Nowadays, user behaviour and technological developments are evolving at such a rapid pace. If you spend too much time planning, it’s possible that consumer attitudes and the relevant technology will have already changed by the time you release your product. As such, your software product might become obsolete in just a short period of time.

In the waterfall method, if you were to change the plans in the middle of the implementation stage, you likely will have to start the entire project all over again. Such a decision will cost a company a lot of time and money.

Additionally, the development team won’t be able to receive user feedback until the final product is released. User feedback is crucial to creating a user-friendly experience. Without it, there could be major oversights regarding the software’s functionality.

Because of its linearity and rigidity, the waterfall model is more suited for projects that have defined features and concrete goals. Unfortunately, nowadays, most industries evolve too quickly for such a stiff framework.

The Agile approach aims to improve on the waterfall model by streamlining the planning process and allowing for changes throughout development.

Instead of having a single linear developmental process, the Agile approach segments the project into iterative increments called sprints. In each sprint, the development team will aim to plan, design and completely develop a small feature set (a group of functions that the product will have). This is a contrast from having to plan all the product features in the waterfall method. Generally, a sprint only takes a few weeks to complete.

1. Backlog planning – The sprint backlog records the feature sets that a particular sprint will require. Since the number of features in the sprint backlog is kept at a minimum, the developers can quickly start building the product without having to spend months or years planning.

2. Scrum meetings – Scrum meetings are held daily. Such meetings will have everyone tell the rest of the team what they’ve finished and what they’ll be working on for the day. They can also share any issues that they might be having.

3. Backlog refinement – During the process, the team might realise that certain feature sets need to be added or removed. Since each sprint backlog is kept small and manageable, such changes are usually easy to implement.

4. Sprint review and testing – Once the sprint is finished, the product will be reviewed by the stakeholders and the product owner. The owner will decide which feature sets to add or remove from the final product. The product is then released to the customers and their feedback is taken into consideration going into the next sprint.

5. Retrospective – Before beginning the next iteration, the team will meet up one more time to reflect on the previous sprint. Here they will analyse what went right and what could be improved upon.

This entire process is repeated until the final product and all its feature sets are completed.

The flexibility of the Agile approach makes it a great framework for industries that are constantly facing changes. This could be changes in user behaviour, changes in technology and even changes in laws and regulations.

But perhaps the biggest advantage of the Agile approach is the fact that it’s able to get a testable product to the market in a short period of time. Not only will this give the team real user feedback, but it can also give the stakeholders an idea of how successful the product can be.

Hopefully, this gave you a better idea of what the Agile approach is in comparison to the traditional waterfall method. Indeed, a lean-agile mindset can be valuable in any industry, whether it be marketing, sales or even construction.