Trampolines have the incredible ability to transform your backyard into a place of endless entertainment. With countless fun and games that can be had, both younger and older kids alike will have no trouble entertaining themselves for hours on end with a strong, well-made and safe trampoline.

Whether you’re considering buying a trampoline and aren’t sure how to get the most use out of it or already own one and are looking for new ways to enjoy it, don’t fret. Below, we’ll go over some of the most popular trampoline activities for both younger and older kids. Let’s get started! 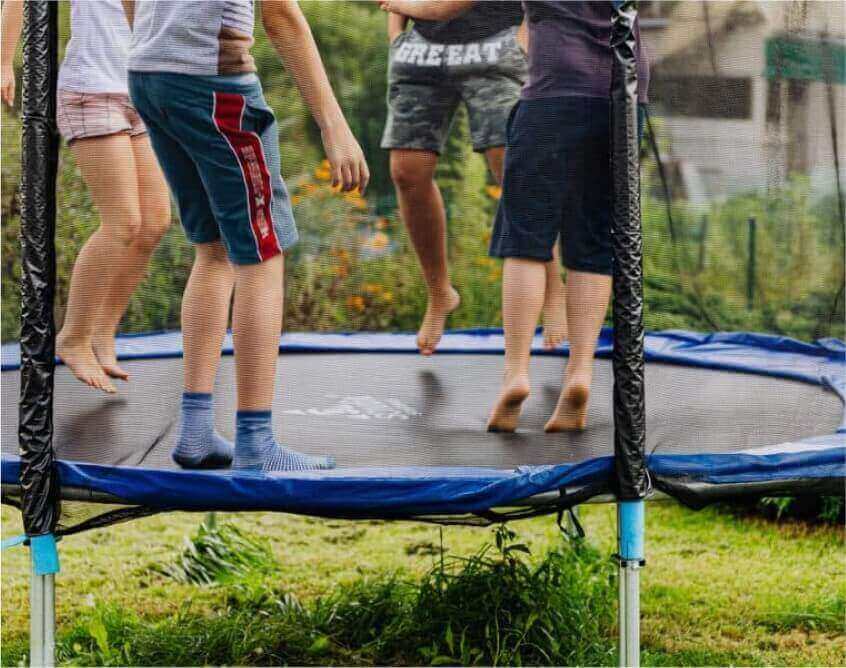 Surprisingly, the jumping mat of your trampoline can make a great surface for drawing with chalk. Whether it’s simply for a creative outlet or to divide up a court to play a game like foursquare, drawing with chalk is a surefire way to get your little ones outside more. When finished, the chalk can simply be washed away with a hose, making it a quick, easy and cheap trampoline activity.

With the help of sheets, blankets and some imagination, any trampoline can be transformed into a magic castle or fortress. If you have a trampoline with netting, you can hang sheets over the nets and then lie blankets, pillows and more over the jumping mat to create a confined yet cosy fort to play in.

Another great way to do something different with your trampoline is to have a teddy bear picnic. Grab a bunch of your kids’ favourite soft toys as well as something comfortable for everyone to sit on, and maybe even a picnic blanket if you have one too.

Whether you actually want to allow your kids to eat on the trampoline or leave it up to their imagination is up to you, but just be prepared for the bears to be bouncing around everywhere by the end of it.

Poison ball is a great, high-energy game that’s fun for the whole family. The aim is to avoid touching any balls as you jump around the trampoline and you can add more balls as the game goes on to make things harder. It can be played individually or as teams, but either way, it’s best to play with soft balls to avoid any injuries.

For older kids, volleyball on the trampoline can be great, but surprisingly challenging fun. The two teams jump on opposite sides of the trampoline and hit the ball back and forth. No one can stop jumping and no one can let the ball hit the ground or hit it twice. Keeping the ball in the air while jumping is harder than you’d think, keeping everyone challenged and hooked into fun.

Another option is to place your basketball hoop beside your trampoline and watch your kids have hours of fun shooting hoops and slam-dunking the night away.

While this game can be lots of fun, we recommend making sure the kids either jump on their knees or jump very carefully on their feet to avoid any potential injuries.

The best way to play is to start off slow and increase the speed of the snake as the game progresses, upping the longer the rest of the players survive.

Tramp works similar to the way Horse does in basketball, as one player does a trick and the rest take turns copying them. If someone can’t do the trick, they receive a letter. The game continues with each person taking a turn performing a trick, and the first player to receive all five letters of T-R-A-M-P is eliminated, until there’s only one player remaining. The most important factor is safety, so take a look at trampoline safety tips here.

For a quicker game, you can shorten the word to anything you want, like “dog” or “cat”.